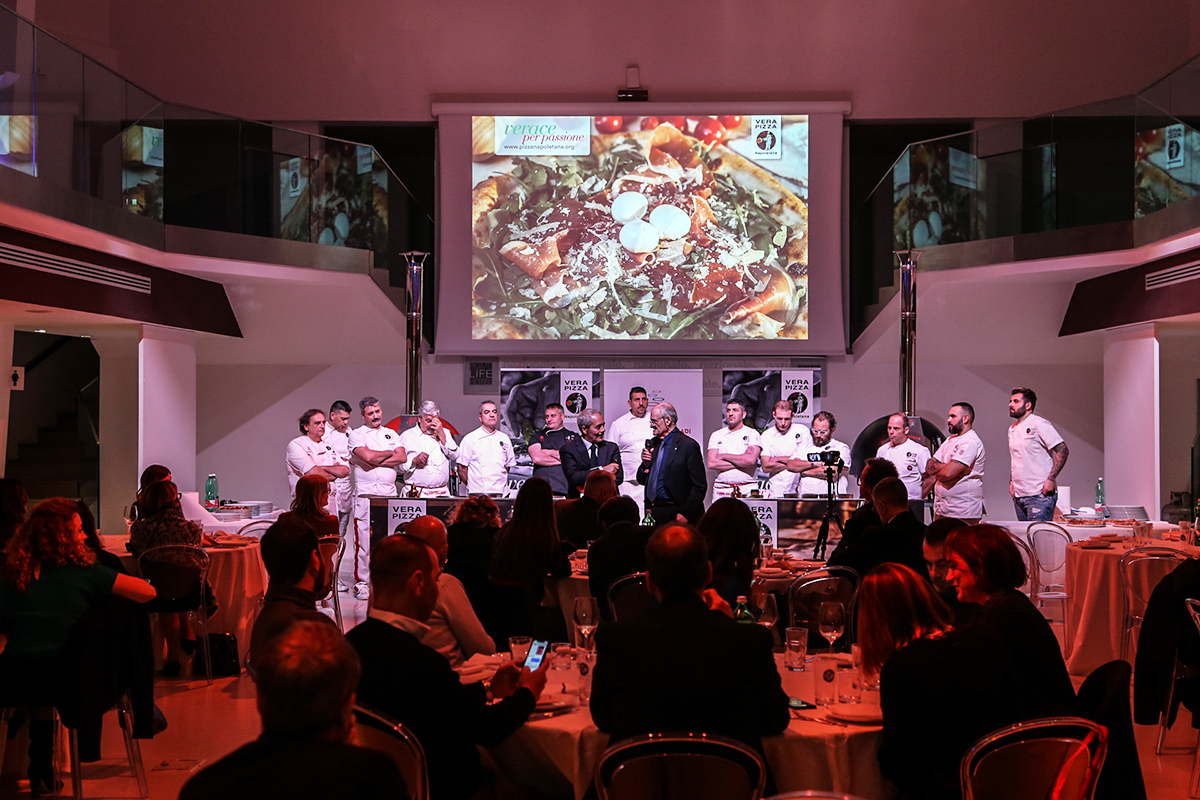 Are presented the appointments of 2019 and the stages of the qualifications for the Olympic Games that will involve Europe, USA, South America, Australia and Japan

The Olympic Games: from 8 to 10 July in Naples the challenge between pizza makers coming from all over the world.

It will be the highlight event of the international Convention of the Associazione Verace Pizza Napoletana, which this year celebrates its 35th anniversary.

The Associazione Verace Pizza Napoletana-AVPN celebrates its 35th birthday and for the occasion calls together pizza makers from all over the world  for the Olympic games of Vera Pizza Napoletana, an intercontinental contest that will be held during the international convention, from 8 to 10 July in Naples, at the offices of Capodimonte.

This is the first great news of the Association's 2019 agenda that, in the year of the 35 candles, promises to be full of events dedicated to the protection and enhancement of this authentic excellence of the gastronomic Made in Italy and its Art, recognized as UNESCO heritage. The official presentation of the calendar of activities, which took place in Rome, was also the occasion for launching, in national preview,  PullicenHell, the first beer registered by AVPN and realized in partnership with Kbirr which perfectly summarizes the combination of artisanality and being Neapolitan, celebrating at the same time the figure of Pulcinella.

"In 2019 we celebrate an important anniversary - explains Antonio Pace, president of the Associazione Verace Pizza Napoletana- with still a lively enthusiasm for the recognition by  UNESCO of the art of Neapolitan pizzaiuolo. An important goal, obtained a year ago, that still makes us very proud, because it has rewarded our work carried out with passion since 1984. Since then many steps forward have been made in the defense of the True Neapolitan Pizza and the profession of pizza-maker. Also the Association, born with just twenty members, has grown enormously to become a network that today includes over 760 affiliated pizzerias, more than 470 pizza-makers registered and six schools across the five continents, including one that we will inaugurate in Poland in February. So, in order  to celebrate this extraordinary product and its protagonists, we decided to organize a great Olympic competition that  will surely give a further global recognition to the hundreds pizzerias and pizza-makers who have contributed to these historic results in Italy and worldwide".

After the presentation in Rome, AVPN is preparing for a real Olympic tour de force that, waiting for the international convention, will involve many countries outside Europe, from the United States to Australia, to select the dream team of pizza-makers coming from all the participating nations . Brazil will open the qualifying rounds in occasion of the ANUFOOD Brazil fair (12-14 March), where representatives from South America will be chosen. It then continues in Germany for European nominations (Frankfurt, March 25-29) and then again in the States to evaluate the best maestri of the East Coast and Canada (15-19 April). The tour ends with the Olympic qualifications for Oceania in Australia (Melbourne, April 29 - May 5), those for Asia in Japan (Kyoto, May 13-18) and those for the West Coast and Mexico, always in USA but from 3 to 7 June.

To contend for the Olympic 'medals' in Naples from 8 to 10 July - both individually and for countries - will be not only the AVPN affiliated pizzeria and pizza-makers across the five continents, but also the non-affiliated under 35s (to them will be reserved a special category), which will compete with Margherita, Marinara or other types of pizzas with ingredients of their choice, as long as they respect the rules of Neapolitan gastronomy. Five, in particular, the disciplines in competition: we go from the classic Neapolitan, made according to ancient traditions, to that Per Gourmet, which allows you to revisit in a modern way the rules of the AVPN discipline, from Gluten free to Fritta (deep-fried), up to Mastunicola , a disc of pasta whose recipe includes lard or extra virgin olive oil, basil, cheese and pepper. Preceding the award ceremony, scheduled for July 10th during the night of gala, the event "Pizza with the Stars", which will see the participation of characters and VIPs from the world of entertainment, culture and gastronomy that will compete in funny performance with the AVPN’s maestri  pizza-makers.

But during the three-day international competition, with the challenge of the year, large space will also be dedicated to the comparison and the moments of specialization among the AVPN members and the operators of the sector, ranging from numerous tastings to company workshops, from technical seminars on products and ingredients to guided tours in some of the city's most impressive and interesting places. Also scheduled, a conference on the enhancement of the art of Neapolitan pizzaiuolo in collaboration with UNESCO, guided tastings on the correct pizza-wine combination with the Associazione Italiana Sommelierand and some scientific-informative seminars on Neapolitan pizza working processes and on the raw materials with the Federico II University of Naples.

The Rome event was possible also thanks to the contribution of Kbirr, Valoriani Forni, Gimetal and Vini Salvatore Martusciello